To mark International Cat Day, we looked through our photo archive and put together a gallery of cats from around the world.  From feral cats on the hunt to domesticated cats providing companionship, our gallery features images of cats living in Peru, Syria, Egypt, China, Italy, Romania and the United States.

See these photos on APImages.com

In this Aug. 15, 2014 photo, Maria Torero’s son Fabian, 7, plays with the hospice’s cats. Maria Torero, cares for 175 cats with leukemia at her home in Lima, Peru. (AP Photo/Martin Mejia)

A cat looks at a chicken and its chicks, in Caykara, on the Turkey-Syria border, across from the Syrian city of Kobani, Thursday, Nov. 20, 2014. (AP Photo/Vadim Ghirda)

A cat runs at Al-Azhar Park, one of the bustling city’s few public parks in Cairo, Friday, May 8, 2015. (AP Photo/Hassan Ammar)

Abyssinian cat ‘Nara von der Loreley’ looks through a transparent foil prior to the competition during the International pedigree dog and purebred cat exhibition in Erfurt, Germany, Saturday, June 20, 2015. Dogs and cats from 21 countries take part at the exhibition and the different competitions. (AP Photo/Jens Meyer)

Separated by a pane of glass, a white cat on the inside of a Brooklyn brownstone tries to play with a black cat sitting on the exterior window sill Monday, March 1, 2004, in New York. (AP Photo/Kathy Willens) 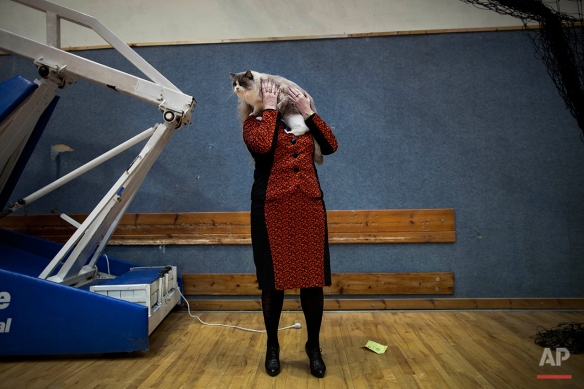 In this June 14, 2012 photo, Natalia Lerner, who immigrated to Israel in 1991 from the city of Tyumen in Siberia, presents her cat to the judges of a cat competition in the central Israeli city of Holon. Cats are prominent in Russian culture, and most members of Israeli cat societies are immigrants from the former Soviet Union. (AP Photo/Oded Balilty)

A cat carries a sparrow it had caught at the Zasavica marsh, 90 kilometers west of Belgrade, Serbia, Thursday, May 22, 2014. (AP Photo/Darko Vojinovic)

Selma, the turtle grabs the attention of a stray cat, while on her daily walk out, near Taksim square, in Istanbul, Wednesday, June 12, 2013. (AP Photo/Vadim Ghirda)

A cat sits by a man reading a newspaper at a park in Tokyo, Monday, Nov. 7, 2011. (AP Photo/Shizuo Kambayashi)

A Syrian migrant woman kisses the paw of Tabush, a male cat that made the trip from Syria to Greece with its owners at the northern Greek border station of Idomeni, Saturday, March 5, 2016. (AP Photo/Vadim Ghirda) 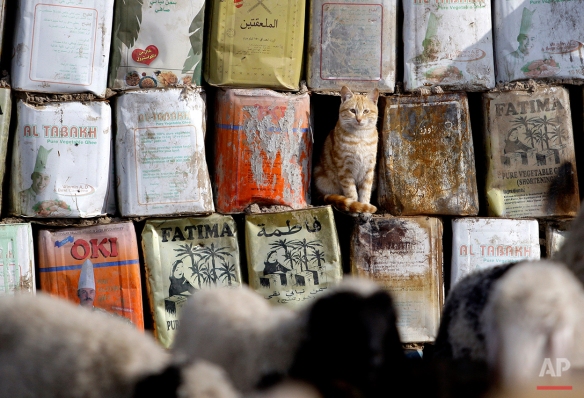 A cat looks at a herd of goats at a compound for the displaced in western Baghdad, Iraq, Tuesday, Jan. 4, 2011. (AP Photo/Hadi Mizban)

A cat stops and warm up under the sunlight, in Rome, Monday, Dec. 8, 2014. (AP Photo/Alessandra Tarantino)

Kittens are held by their owner waiting for the evaluation of a judge at an international cat beauty show in Bucharest, Romania, Saturday, Oct. 1, 2011. Up to 300 cats mainly from countries in central and eastern Europe entered the two day competition. (AP Photo/Vadim Ghirda)

In this Tuesday, May 21, 2013 photo, bicyclist Rudi Saldia and his cat Mary Jane pose for a portrait during an interview with the Associated Press in Philadelphia. Saldia often buzzes around Philadelphia with his year-old feline Mary Jane perched on his shoulder. Their urban adventures have turned heads on the street and garnered big hits on YouTube. (AP Photo/Matt Rourke) 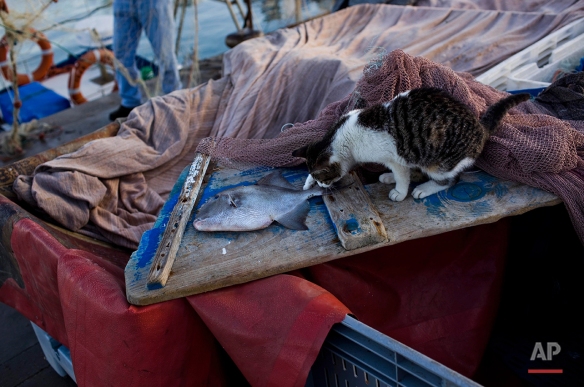 In this Saturday, Jan. 7, 2012 photo, a cat investigates a fish in the port of the southern Spanish city of Barbate, Spain. (AP Photo/Emilio Morenatti)

A cat looks on next to a restaurant in Belgrade, Serbia, Saturday, May 28, 2011.(AP Photo/Vadim Ghirda) 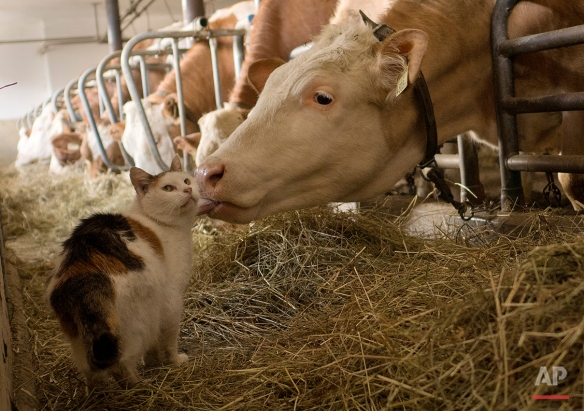 Missy, the stable cat, is licked by a diary cow during feeding time at Madersbacherhof Farm in Brixlegg, in the Austrian Alps, Wednesday, March 18, 2015. The cat lives in the stable with the diary cows who are kept inside for the duration of winter. (AP Photo/Rob Taggart) 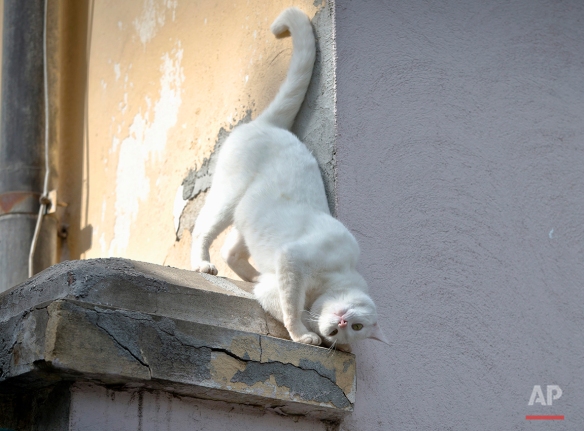 A woman holds her cat as worshipers attend a mass in the Saint Anton church in Madrid, Spain, Saturday, Jan. 17, 2015. It is the animal patron saints day in which thousands of people all over Spain bring their pets to churches to be blessed. (AP Photo/Daniel Ochoa de Olza)

A British Shorthair kitten plays with a toy while being evaluated at an international feline beauty show in Bucharest, Romania, Saturday, March 8, 2014. (AP Photo/Andreea Alexandru/Mediafax)

A cat is stranded on a rock surrounded by rapids at the base of Akron Falls in Akron Falls Park in Akron, N.Y., Monday, April 4, 2011. (AP Photo/David Duprey)

Joyce Kavanagh pets her cat as she sits in her room at the Silverado Senior Living Center Tuesday, May 1, 2012, in Encinitas, Calif. At the senior center, residents are encouraged to bring their pets. Everything from miniature horses to chinchillas  can be found on the grounds, and residents benefit from frequent contact with the pets. (AP Photo/Gregory Bull) 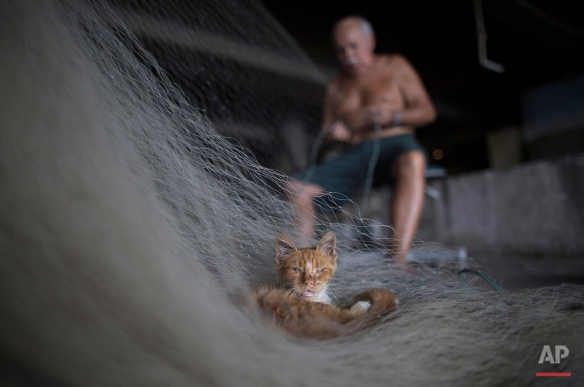 In this Feb. 28, 2015 photo, a street cat that survives on fish scraps nestles on a net being repaired by Manuel Batista de Moraes at the dock in the Vila Pinheiro slum, part of the Mare complex in Rio de Janeiro, Brazil. (AP Photo/Leo Correa)

A Persian kitten, shortlisted for the Best in Show award, is seen while being examined by a referee during an international feline beauty competition in Bucharest, Romania, Saturday, Sept. 29, 2012. The contest, significantly less enjoyed by the cats than by the many visitors, was entered by more than 200 felines. (AP Photo/Vadim Ghirda)

A Bangladeshi woman cleans the doorway to her home as a cat sits nearby early in the morning in Dhaka, Bangladesh, Thursday, Jan. 21, 2016. (AP Photo/A.M. Ahad)

Spotlight is the blog of AP Images, the world’s largest collection of historical and contemporary photos. AP Images provides instant access to AP’s iconic photos and adds new content every minute of every day from every corner of the world, making it an essential source of photos and graphics for professional image buyers and commercial customers.  Whether your needs are for editorial, commercial, or personal use, AP Images has the content and the expert sales team to fulfill your image requirements. Visit apimages.com to learn more.

Written content on this site is not created by the editorial department of AP, unless otherwise noted. 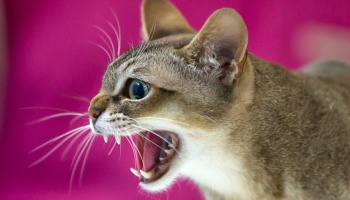 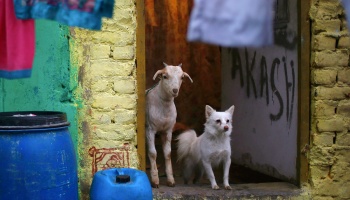 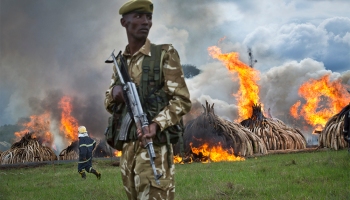 Pictures of the Week

In “Pictures of the Week”

Your email address will not be published. Required fields are marked *